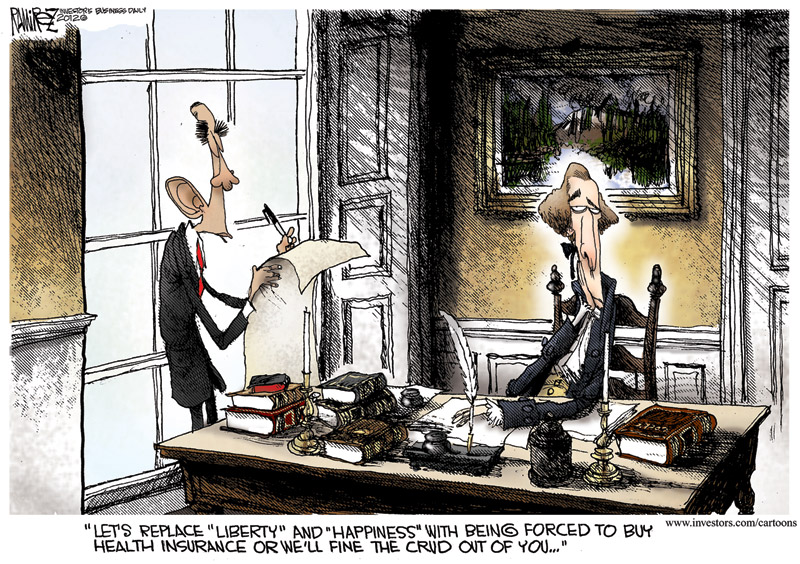 The Pundit is concerned that the federal government’s taxing power can be exerted as a coercive mechanism to enforce the government’s view of social welfare. At least the Supreme Court preserved our freedom to refuse to purchase health insurance. But freedom these days comes at a price. Those who choose not to purchase health insurance must pay a hefty tax penalty. Here is the Supreme Court’s Opinion.

The majority upheld the Individual Mandate as an exercise of the federal government’s taxing power: “Our precedent demonstrates that Congress had the power to impose the exaction in Section 5000A under the taxing power, and that Section 5000A need not be read to do more than impose a tax. This is sufficient to sustain it.” Justice Ginsberg, in a concurrence, would uphold the mandate under both the taxing power and the Commerce Clause.

The Court also upheld the Medicaid expansion, but limited the federal government’s coercive powers with respect to the States. The federal government cannot penalize States that refuse to participate in the program by removing all Medicaid funding. “Nothing in our opinion precludes Congress from offering funds under the ACA to expand the availability of health care, and requiring that states accepting such funds comply with the conditions on their use. What Congress is not free to do is to penalize States that choose not to participate in that new program by taking away their existing Medicaid funding.”

The Pundit supposes that skeptics might read the Court’s majority decision politically. The Court can’t strike down the Affordable Care Act, which is the current administration’s most significant achievement. Striking the ACA could be perceived by world markets as nullifying the President’s power and influence at a time of global economic decline, making the President appear ineffectual, the United States leaderless, and further diminishing confidence in world markets. But the Pundit declines to read Court decisions skeptically.